Fifty blue and white beads are strung on a thick green cord arranged in a circle about five inches in diameter, forming the shape of a necklace. At the bottom of the circle, in the same green color as the cord, there is an upside-down V-shape that resembles a knot in the cord, with the two ends of the cord hanging down. The necklace form is centered along the vertical axis of a thick, rectangular piece of white paper and slightly higher than the paper’s horizontal axis. The paper’s edges are torn. Although the pattern of the tearing is irregular, it almost resembles a scalloped border. The paper is mounted on top of a white surface that is just slightly larger than the scalloped torn edges. A ruled line in graphite runs across the paper’s lower edge, extending nearly to the left and right edges and leaving about two inches of blank space between the bottom of the necklace and the graphite line. On that line, the title, artist’s name, and date are written in neat, legible cursive: Talisman, Barton Lidice Beneš, 1994.

On closer inspection, the blue-and-white beads reveal themselves to be medicine — fifty identical capsules, carefully positioned so that the same printed information is visible on each one. Above the blue line on each capsule, there is a black unicorn with tail curled over its back and one foreleg lifted and just below it the word “Wellcome” (with two l’s). Below the blue line, two rows of numbers and letters — “Y9C” over “100.”

The capsules are clustered in symmetrical groupings. Immediately to the left and right of the knot, there is a cluster of six; next on either side is a cluster of five; after that, two clusters on each side of four; around the upper part of the necklace, there are four clusters of three capsules each. The blue line that bisects each capsule lines up with the blue line on its neighbor, giving the effect of a blue thread that seems to run parallel to the green cord linking the clusters of capsules.

The hue of the green cord is dull, a little grayish. On its surface there is a variegated pattern that, when examined closely, includes whole and partial capital letters: near the top, part of an “A,” and “UN.” At the right side, an “O.” In other places, curved lines that resemble part of a frame or a border are visible, in others, a bird’s wing and a leafy branch. The same green material covers the inverted V-shaped knot and its loose ends hanging down. Because those hanging loose ends are longer than the glimpses of cord visible between the capsules, longer sequences of capital letters are visible here: “STATES OF” on the left side, and “S OF AMER” on the right.

Taken together, the color, the letter and word fragments, and the imagery tell us that this green material is US currency. Judging from the grayish tint, the bills are not new ones but rather ones that have been in circulation. There isn’t enough information to indicate the denominations of currency. Strips of it are tightly rolled to a uniform thickness and mark the distances between the clusters of capsules. Between most of the clusters, there is an interval of space filled by the green cord approximately equal to the width of two capsules. A length of green cord about four times that long is visible at the lower edge of the necklace’s circular shape. It may have initially appeared that they formed a continuous cord, but instead they are more like beads. Fifteen of them. At the top righthand side of the necklace, one of the currency beads is slightly off kilter. This slight irregularity reveals that the fifty capsule beads and the fifteen currency beads are actually strung together on black string.

The knot also bears closer scrutiny. The two loose ends, or tails, hanging down from the knot are actually slightly curved and of slightly varying thickness. For example, more of the letters at the beginning and end of the words “STATES OF” are visible than of the letters in the middle. And the shape of the knot is actually more triangular than knot-like. It isn’t merely a knot — it is a wishbone, carefully and completely wrapped in strips of US currency.

It isn’t clear what attaches the necklace to the paper it rests against. The ends of the wishbone, the rolled beads, and the capsules cast shadows on the paper, but nowhere is there evidence of how it is mounted. Because of that, and its placement slightly higher than center on the paper, the necklace seems to hover over the firmly drawn graphite ground line at the bottom of the paper.

From research I undertook to propose placing this work on display in our galleries, I know that art created later in the career of Barton Lidice Beneš navigated the complexities of the HIV/AIDS crisis after it emerged in the world in the 1980s. Reading accounts from the time, one can easily position Talisman, in its composition of AZT tablets, shredded American currency, and a wishbone, as a commentary on both the intense desire for an effective cure to a newly emergent disease and the fact that the first treatment for it to hit the market went on to be described by the New York Times in 1989 as “the most expensive prescription drug in history.”

But what do I see when I take the time to really look at this work? I see fifty 100 milligram capsules of azidothymidine (AZT), strung together like a pearl necklace with a wishbone pendant. Current dosage recommendations for adults taking AZT are generally around 600 milligrams per day (which, judging by some accounts, may be a much lower amount than what was recommended when the drug debuted). Therefore, Talisman represents slightly more than eight days of treatment at an initial cost of $383 (adjusted for inflation). Ultimately, I see the uncomfortable question it would force patients regularly to ask themselves: what price am I willing and able to pay for another week of life?

– Lauren Turner is Assistant Curator for the Collection at the Ackland Art Museum.

When I first saw a work by Barton, it was at White Columns, an alternative space in New York City’s West Village that showed emerging artists. Bill Arning was the director/curator. Barton’s work referenced AIDS, by using his own blood as a medium. That piece was sold, which I regretted. Later, when I saw Talisman at Gracie Mansion’s gallery in 1999, and Barton’s metaphorical use of materials, I could not resist. The AZT tablets, the wish bone, and the money made such a powerful visual statement about AIDS and our human condition. It resonates even more today with COVID-19. We are wishing (wish bone) for a cure (like AZT), and there is the big question of affordability when it is available, represented by the money. Barton died in 2012 at age 69 of complications of AIDS, according to his obituary in the New York Times.

– Carol Cole Levin is an artist, collector, and the lender of this work to the Ackland Art Museum. 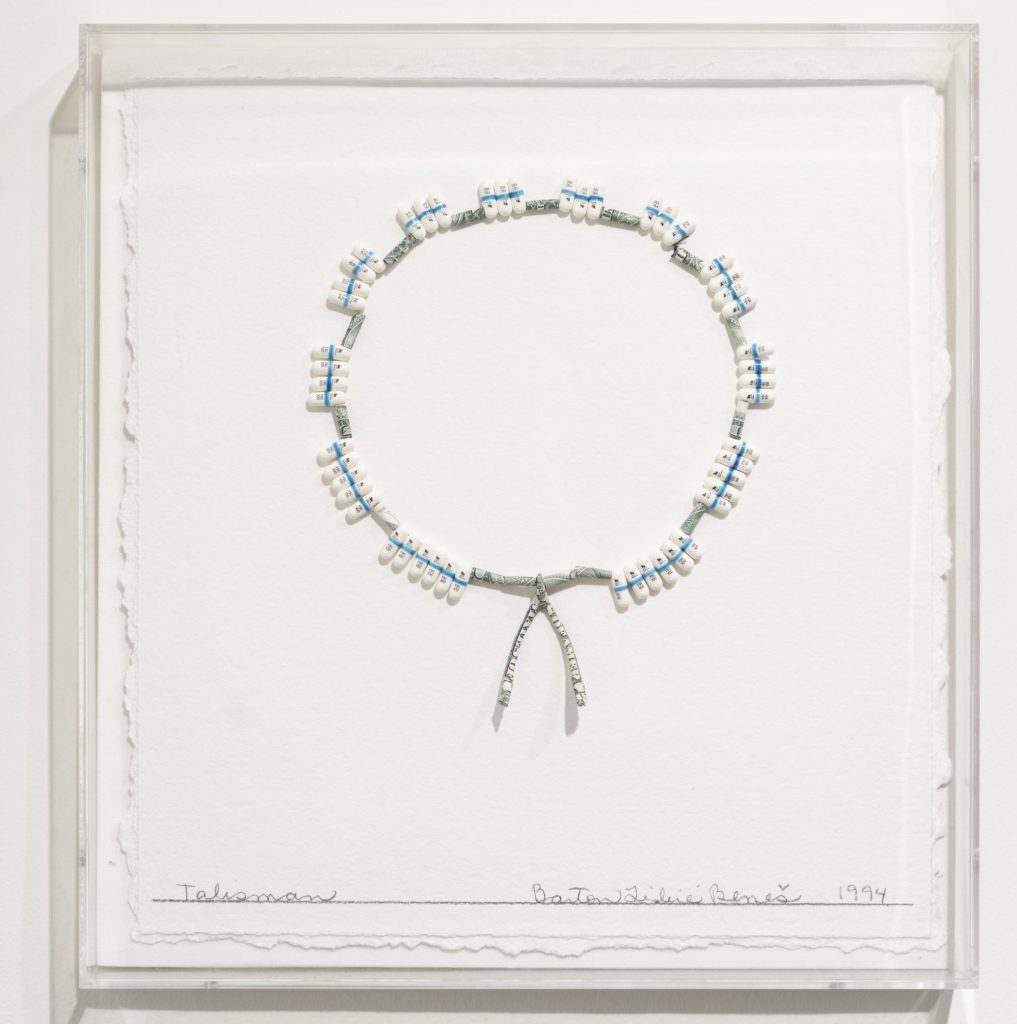 What do I see? A handful of white capsules with blue bands and the imprint of Burroughs Wellcome. Their insignia (look close!) is a prancing pony. It’s AZT, prescription medication guaranteed — well in principle if not always in fact— to suspend reproduction of the human immunodeficiency virus. The pills are strung up in a necklace, following the circular pattern of those early blister-packed compacts for birth control. Enovid, for instance; their slogan, Andromeda freed from her chains! Beneš’s chain is hardly more spacious than a choker. The thread that holds together this beaded arrangement is made of U.S. dollars,

sliced and rolled tight into dull green filament. The doses fluctuate. Six pills, five pills, four, three, three, three, and then the number swings up again, it rounds the throat, the cycle continues. The pendant is an honest-to-god wishbone, no bigger than turkey-sized, stripped bare and gift-wrapped in paper bills. The furcula, what lifts a bird’s wings during flight. The apparatus of an angel, until it snaps.
– Michelle Robinson is an Associate Professor of American Studies, UNC-Chapel Hill.

Past Public Programs (at the Ackland and elsewhere)

TRANSMISSIONS premiered as part of a special online screening event hosted by Visual AIDS and supported by the Ackland. A live Q&A with the commissioned artists followed the screening. The videos are available to view online at visualaids.org/transmissions.

Visual AIDS is a New York-based non-profit that utilizes art to fight AIDS by provoking dialogue, supporting HIV+ artists, and preserving a legacy, because AIDS is not over.

Learn about the latest AIDS research from experts at Carolina and beyond at the UNC Center for AIDS Research’s 2020 World AIDS Day Virtual Symposium. Free. Registration required.

Free. Learn more about the Symposium here and click here to register.

On December 9, 2020, the Ackland’s Object Based Teaching Fellow, Erin Dickey, led an informal conversation focused on Barton Lidice Beneš’ piece, Talisman. Click the video player below to watch the recording!

Close Looks: “Talisman” by Barton Lidice Beneš is supported in part by the Laughing Gull Foundation.