“Figure Portrait of the Chevalier d’Eon”

Audio Description of Figure Portrait of the Chevalier d’Eon

Standing a mere seven inches tall, this delicate porcelain figurine depicts an individual in late-eighteenth century French attire. Upon the figure’s cascading arrangement of light brown curls is a voluminous, white hat, called a mobcap, which is cinched with a billowing royal-blue bow and decorated with a single large, black ostrich feather. Even depicted in hardporcelain, we imagine the light gauze of this fabric hat, due to the artist’s attention to its wrinkles and pleats. We might further suppose that the flimsy cap is supported by mounds of teased and tousled hair, perhaps from an elaborate wig. A similar pleating is found in the collar of the wide-necked gown, which folds over the wearer’s black jacket. Elbows, clad in playful red and black-polka dot fabric, peak out from behind a luxurious white muff of ostrich feathers. The figure’s skirt is a simple, unpatterned yellow sheath-style, which clings to shapely calves that culminate in the pointed toes of purple shoes upon a squat, rocky plinth glazed in brown.
Upon viewing the reverse side of the figure, we notice that the hints of polka dot fabric reference a full bodice with a short bustle and the black jacket is styled as a short cape. The figure’s light-colored hair flows in loose waves, not quite curls, from a deep cleft in the figure’s hat. The hair’s texture is indicated in two ways: first, beneath the glaze, the artist has included subtle ridges in an undulating wave pattern; and second, the application of glaze is varied, with thicker applications implying a rougher texture or even a lightly powdered coiffure. The glaze is applied thinly throughout; this is particularly evident on the reverse side of the base, where light applications of washes reveal the horizontal brushstrokes used by the maker.
While the colors of this costume are varied and vibrant, it is the textures of the porcelain that demand the viewer’s attention. The lines of the porcelain alone suggest the wide mix of fabrics that make up these garments. The hat and lace collar are both pinched with tight pleats, indicating a light and delicate fabric. Conversely, the black jacket is glossy and smooth — the only creases are found at the bends of the figure’s elbows — indicating a thick and robust fabric, ideal for outwear. The long straight lines of the yellow skirt similarly denote a heavy cloth, unlikely to billow or ripple with the wearer’s movements or a breeze. The most remarkable texture, however, is the sumptuous ostrich muff, which cascades in a flowing pattern of short swaying feathers from the core of the figure, obscuring the body. Coated with a simple clear glaze, these feathers unexpectedly attract the eye as much as the purple shoes or polka dot sleeves, despite their lack of color.
The painstaking attention to detail in the shaping of this diminutive figurine contrasted with the simplicity of the glazed colors presents a puzzle. The face, with its prominent nose and broad jaw, is ambiguous. Two lines of red suggest lips, small dots of black are eyes, ruddy cheeks emphasize the prominent bone-structure. This does not appear to be a nameless, generalized vision of female beauty, nor is a specific identification readily apparent to our modern eyes.

I see those purple shoes peeking out under the butter-colored skirt. I see the bright orange sleeves scattered with dots (a new, still rare pattern in the era). The feather muff clutched at the waist reminds me of a pom-pom but also acts as a barrier. It echoes the glittering black feather on the hat. The face could be from a Watteau–rosy cheeks, bright lips, eyes upturned. The attitude is youthful, though the porcelain’s subtle ridges betray some middle-aged sag. The posture (one dropped shoulder, hips jutting back) seems…coquettish? defiant? The gallery lights glare off the figure’s glossy surface. It looks thick, solid, belying the material’s fragility.

This Chevalier d’Eon dazzles in the gallery case. Shadowed by Voltaire (twice the size, enthroned in an armchair), she grabs your attention. Her outfit here is more eye-catching than the simple black-and-white ensemble she wears in Stewart’s portrait or in Robineau’s painting of her famous duel with the Chevalier de Saint-George.

Eighteenth-century Europe loved its celebrities: on novelty plates, in printed images, in satirical caricatures, as porcelain figurines. How did someone’s image survive being handled like that? Maybe like this — with vibrance and slippery shine.

– Ellen Welch teaches and writes about seventeenth- and eighteenth-century French literature and culture at UNC-Chapel Hill. 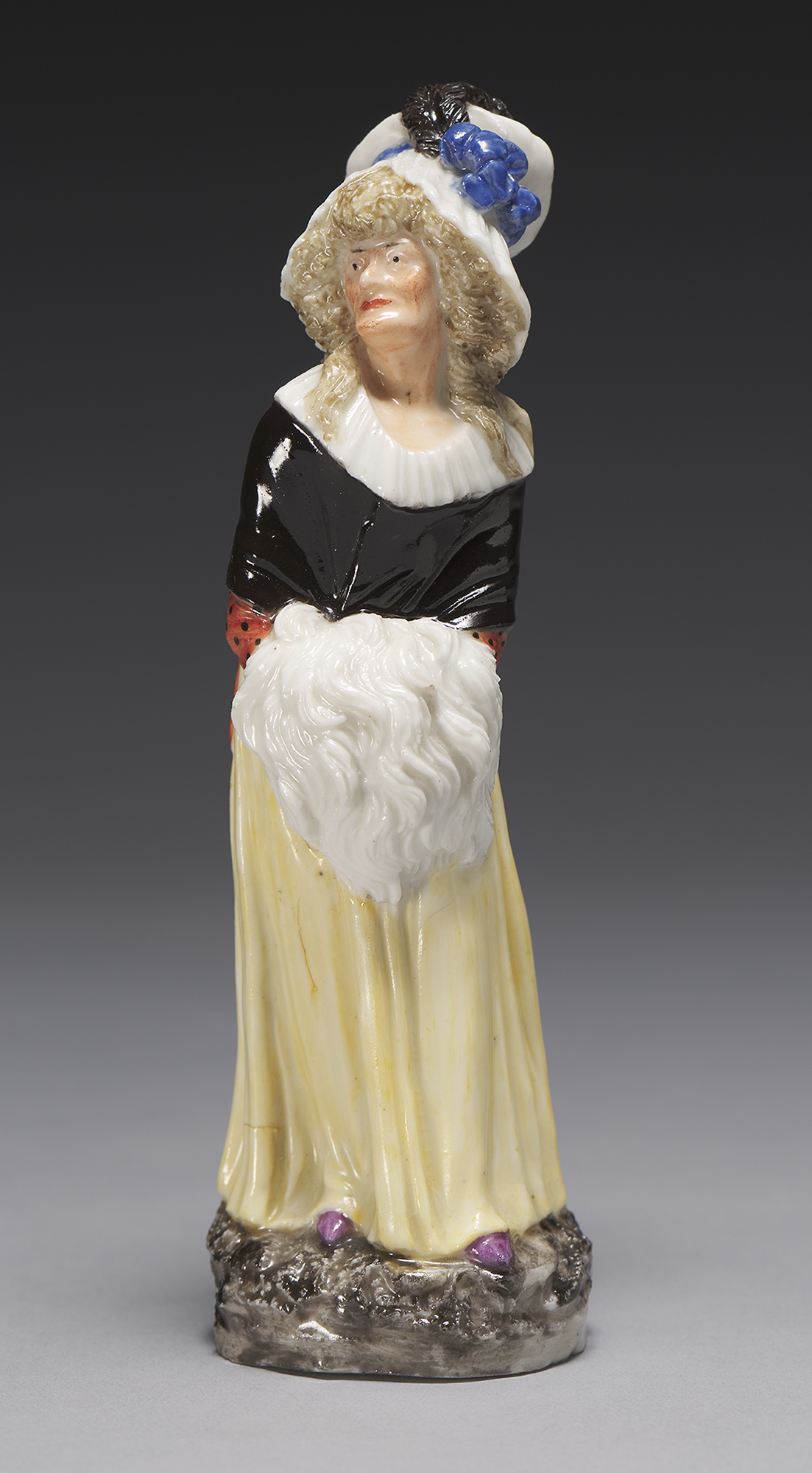 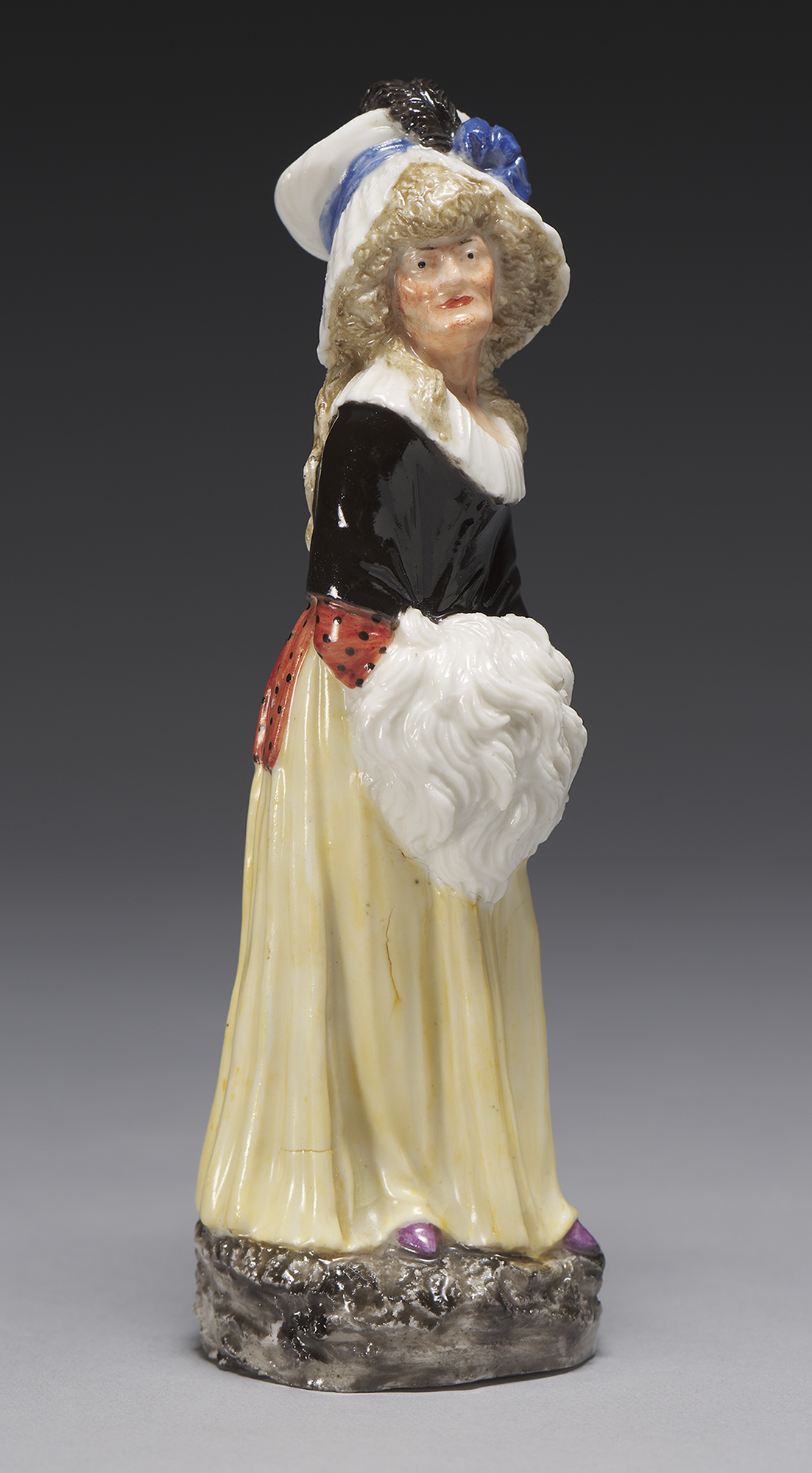 When I look at this object, I see so many contrasts. Many of the colors in this figure’s costume are bright, but they seem obscured by the black jacket and the white muff of ostrich feathers covering the upper body. The color is also quickly and thinly applied, but the rendering of the porcelain is delicate and detailed. Similarly, the body of the figure is graceful — curving up, looking to the right — but the face is rough and broad. What kind of person is supposed to be represented here? Many of the visual elements feel at odds with each other.

My experience of this object is complicated by what I’ve learned as I’ve researched its subject. On the one hand, I see the figure of a mature woman: she wears a dress, carries a muff, and has a mobcap on her head, all of which are the hallmarks of a late eighteenth-century matron. The subject, however, has been identified as the Chevalier d’Eon de Beaumont, a French diplomat and spy who lived publicly as a man for nearly fifty years and then as a woman for over three decades. Knowing this, the features on this figurine that first read as mature, now read as masculine to me. Given that d’Eon was widely accepted as a woman in later life, does this object suggest a more nuanced understanding of gender identity than we normally ascribe to past centuries?

The strangeness of this figure prompts me to look closer and wonder what we are seeing. I see a figure whose face is at odds with everything else about her: the fashionable gown, the mane of frizzy hair topped by an outsized mobcap jauntily adorned with a blue ribbon and a feather. That face, which is ostensibly “feminized” by the rouged-up cheeks and artificially red lips, is not the countenance of the pretty young woman one might expect to see, given her coquettish pose and her attire. Instead, with the dark brows, ruddy complexion, and angular features, it is the unidealized, almost craggy, visage of an older woman; or perhaps of an aging man dressed as a woman. The disjunctive qualities of the work include the disjointed, even clashing color scheme of her ensemble (purple slippers, yellow skirt, red sash, black shawl, white fur muff).

Given that the Chevalier d’Eon identified as a woman, lived much of her life as a woman, and was believed by her contemporaries to be a woman, it seems probable that her actual appearance was more conventionally “feminine” than this and other representations of her would have it. The disjunctions in this figure seem to me to deliberately signal a tension between d’Eon’s identities as a man and as a woman — conflicting identities that she contended with throughout her life. Without those disjunctions, this figure would just look like any other dainty porcelain lady of the eighteenth-century. Instead, through form and color, this figurine speaks to the complexities of a non-binary identity in a world that insisted on binary gender difference.

–Melissa Hyde is a Professor of Art History and Distinguished Teaching Scholar at the University of Florida; she also guest curated Becoming a Woman in the Age of Enlightenment: French Art from the Horvitz Collection hosted by the Ackland in 2018.

Related Programs in Our Community

Using museum educator and scholar Margaret Middleton’s concept of “queer possibility,” we can view the Chevalier d’Eon as a queer and/or trans historical figure, one who seemed to encounter a fair level of community acceptance during their own lifetime in the eighteenth century. We are fortunate today to be part of a proud LGBTQIA+ community here in Chapel Hill, and we join with the towns of Carrboro and Chapel Hill in celebrating “Small Town Pride” this June. Read the calendar of community Pride events throughout the month.