“Eucalyptus Bark from an A-Bombed Tree, Hiroshima, Japan, from After Hiroshima” by elin o’Hara slavick

Audio Description of Eucalyptus Bark from an A-Bombed Tree, Hiroshima, Japan, from After Hiroshima by Elin O’Hara Slavick

This print is approximately 27 inches by 18 inches in a portrait orientation. As a cyanotype, the print is a solid cyan color with areas of white negative space where the print was not exposed to UV radiation.

The texture of the surface is grainy, bumpy, raised. From a distance the blue pigment appears evenly distributed but upon closer inspection there is a subtle gradient ranging from lighter cyan to darker pools of blue. Minute bends in the paper give depth to the image almost like the cracks in the bark of a tree.

Aligned vertically along the center axis of the print, the six negative spaces of Eucalyptus bark resemble an archipelago of white islands surrounded by a cyan ocean. Although each area where the bark prevented UV exposure has an irregular shape, the overall alignment imparts a sense of symmetry to the work.

The largest pieces of bark can be found at the bottom of the print, taking the form of a concave arc nearly spanning the width of the print and ending in a forked prong on its right end. Here, the upturned curvature of the bark and jagged edges of the exposure evoke a somewhat grotesque smile.

Moving upwards, the next piece of bark is the second largest measuring about a third of the width of the print. The edge of this piece is much more irregular making its rectangular shape appear like a rocky coastline. Small specks of cyan linger, suspended in the white negative space gesturing towards tears in the original Eucalyptus bark.

The next three exposures appear equal in size with the first taking a rectangular shape, the second taking an ovular shape, and the third taking the shape of an abstracted bat or bird, viewed from above.

Finally, at the top, a small piece of bark exposure crowns the work, composed of irregular curves that fit no shape.

What do I see in this work? I see six odd figures, all the same light-peach color but each a different shape and size. Stacked like a tower, the largest figure sits at the base, the smallest crowns the top. Against the deep blue background, the figures appear almost luminous. If you look at them long enough, they seem to move.

Together, the figures remind me of the moonlight shining on the ripples of a river at midnight. Or bones excavated from a prehistoric site or even a crime scene, now laid out for scientific examination. Clues to an unsolved mystery.

But knowing the work’s title changes everything. It’s “Eucalyptus Bark from an A-bombed Tree, Hiroshima, Japan.” How different from the famous photographs of Hiroshima. The horrific images of human pain. The shadows burned into walls of children who’d vanished. “Eucalyptus Bark” suggests beauty, quiet, and new perspectives on “evidence”.

Like hundreds of other trees in Hiroshima, many now marked by plaques, this eucalyptus is an A-bomb survivor, too. Moments in the life of its bark, caught in cyanotype, invite us to contemplate the long-term effects of the A-bomb on the natural world and the meanings of trauma and survival.

– Jan Bardsley is Professor Emerita of Japanese Humanities in the Department of Asian and Middle Eastern Studies at UNC – Chapel Hill. 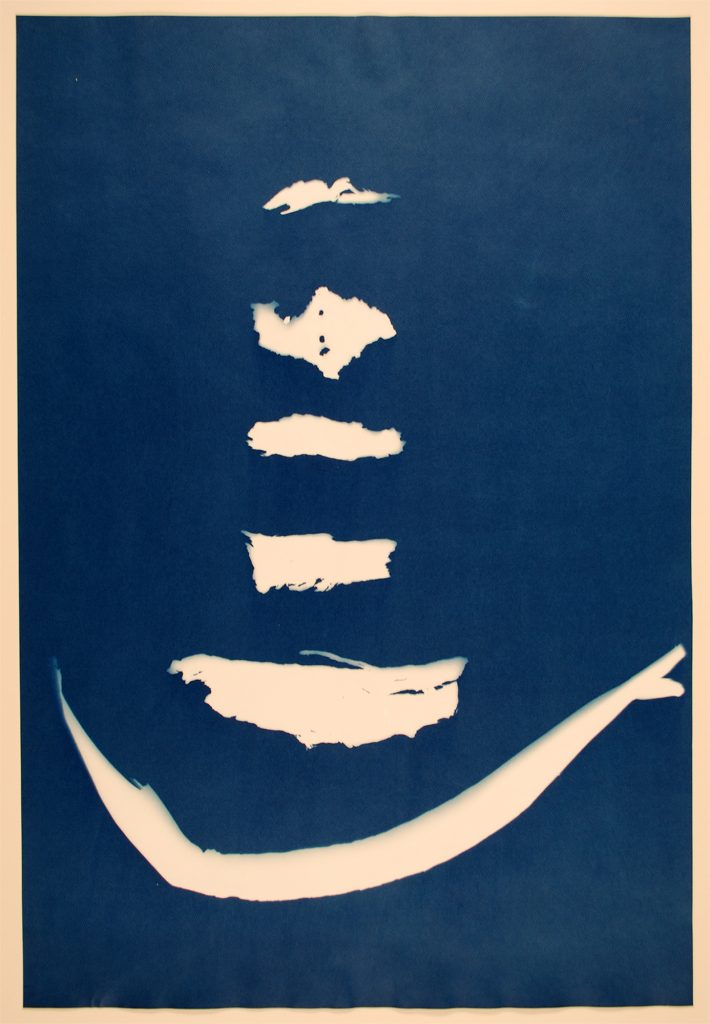 I see a portrait, the field poured with Prussian blue where organic white forms stacked and spaced in a column. These five white shapes seem torn and held center by unseen tension. The topmost is smallest as if it is leaving. Their flat impressions pause in place as if glued . At the base of the composition a thick graceful white line drawn from left to right— a forked finish at right. It suggests an ironic grin ready to receive the column’s release. The line grounds the composition with its width; I see balance.

Where is the visual gnarled chaos my narrative provided for this title? The atomic bomb spread such fierce exothermic release I imagine singed, sickly shapes. Ms. slavick’s trip to Hiroshima informed her artistic choice. She curates our viewing from her

witness of A-bombed objects sixty-five-plus years later. She created a cyanotype —- an alternative negative-less photo process. Images placed on sunprint paper. After it’s exposure to sun, light, or radiation, the bare image develops with a rinse of water. The exposure results in white objects surrounded by a cool bluish background. So, the exposure leaves permanent shadows. Indelible imprints of loss. In Ms. slavick’s words, “It’s not the thing itself, it’s also the shadow”.

– Maria Piskor was raised in NYC and studied medicine but preferred theater. She is a teaching artist, docent, producer, director, and actor.