A white porcelain teacup tops Elizabeth Alexander’s sculpture, Spit Cake. The vessel’s foot and handle, both edged with gold, remain intact, but significant portions of the object’s body have been cut away. Once solid and smooth, the walls of the cup are now fragile and jagged, and any liquid poured into the cup would immediately spill out onto the thirty-nine dishes piled below it.

Like the teacup they support, the edges of these dishes have been also been cut. As a result, this stack of plates, bowls, and cups looks more like a tower made of paper doilies than one of dinnerware. The edges of each dish follow a similar, scalloped pattern, but the tiny cuts that create this effect vary, and no two dishes are identical.

The dishes in the top third of the sculpture feature the most cuts, some of which are so intricate that the pieces of porcelain take on a pixelated effect. The two teacups, one lid, one deep bowl, and several plates and saucers that form this section are narrower than those below it. Stacked together, they form an hourglass silhouette.

Like those in the segments above and below, the dishes that constitute the middle section of the piece – primarily shallow bowls and small plates – vary in diameter. Arranged in an alternating pattern, the bowls and plates are upside-down and right-side-up, respectively, and the curved edges of the wide bowls partially obscure the narrower plates from view.

The undulating silhouette of this section of the piece becomes sharper and more jagged toward the sculpture’s base. Here, small plates and saucers separate the large, upside-down dinner plates that dominate this area. These smaller dishes recede from view, so much so that the plates appear to hover. At the bottom of the sculpture, a large, round platter rests on several small supports that slightly elevate Alexander’s work from the base on which it is displayed.

When viewed from above, the dishes that comprise the sculpture appear to be almost entirely white, and the only visible areas of color are the thin gold borders on the handles and feet of the lid and teacups at the top of the piece. When viewed head on, highlights and shadows appear on the surface of the dishes, and the sculpture takes on a wider range of values. And when viewed from below, a blue and green floral pattern appears on the underside of the upside-down plates and bowls.

From afar, this porcelain tower evokes the spit cakes after which Alexander names her piece. These cakes, made up of thin layers of batter, are associated with weddings, as is the set of china with which Alexander sculpts. The lacy edges of the dishes add to the celebratory spirit of the piece. When looked at more closely, however, the cake transforms into a pile of broken dishes, and the sharp and jagged cuts that create this lace-like effect come into view.

From afar, I see an elegant tapered tower of white lacy layers. As I near, I see a stack of china plates and teacups, mostly upside down. As I approach, this sculpture causes me to smile as I realize the material used to create it. The edges of all the pieces have been carved away in irregular patterns, creating a lacy effect. Bone china is a strong, hard, and an almost translucent porcelain. Elizabeth Alexander must have steady hands to cut the edges of the plates to such a filigreed effect and to stack them so artfully. The layers of this piece are placed from largest plates at the bottom to smaller teacups at the top. Spacer plates allow light to pass through and create an airy form. The plates are secured by careful stacking and a small rod in the center. The final flourish at the top is a right-side-up teacup, but it too has been carved beyond use. The china has been repurposed into an elegant tapered tower. And this helps me understand the title of the work, Spit Cake, a traditional cake made on a spit. Alexander has taken porcelain, a permanent hard material, and worked it into pieces that have the illusion of softness, delicateness, and impermanence. The juxtaposition between the material and the visual effect is at the heart of my response to this sculpture. 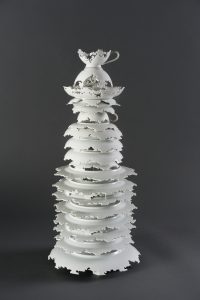 I see layers of white china, specifically different pieces of white wedding china. This china set is placed on one dish on top of another, forming an almost obelisk-like form. The plates, bowls, and teacups have been carefully cut around the edges, allowing the negative space to remain just as important as the positive space used to complete each layer. The china appears to be smooth to the touch. Even the edges that have been hand-cut seem to have a polished finish.

You would think each layer would decrease in size as one looks from the bottom to the top of this ceramic piece. However, each layer of china is almost grouped by size. Starting from the second platter that rests atop the foundation of the work, the following seven wedding china plates have been hand-cut to roughly a similar size. The following five vessels seem to have taken the form of bowls rather than plates. This group of bowls is slightly smaller than the previous seven plates. Approaching the top of this piece, I notice a mixture of bowls, smaller vessels, and teacups. At the very top of this tower-like form sits an upright teacup.

Elizabeth Alexander’s use of deconstruction reminds me of Steven Young Lee’s deconstruction of jars, platters, and even vases. Lee’s platters differ stylistically from Alexander’s approach to the ceramics deconstruction process; however, I see a shared concept. I see the shared idea that deconstructing the perfected symmetrical form allows the, at times, asymmetrical, negative space to finish the piece.

That is what I see. However, I also see the representation of a European dessert commonly made and enjoyed during celebrations, called a spit cake. Spit cakes are typically prepared by cake batter being applied on a horizontally rotating spit hung over an open fire. Layer by layer, the sweet cake batter is spread in a way that leads to every layer having a uniquely different appearance due to the edges never having the exact application of the batter, just like Alexander’s hand-cut edges of the Spit Cake.

Alexander’s creation allows me to enjoy an excellent piece of European culture and the thought that imperfection sparks perfection. I can’t think of a more visually appealing and emotionally comforting time spent than gaining a closer look into this Spit Cake.

– Sophie Potts is the Educational Program Manager and Project Coordinator at the North Carolina Pottery Center, where the center is “sharing North Carolina’s Clay Stories, Past and Present.”

I see labor, care, and intention. I also feel the intuitive craft a termite or ant draws from as they remove material to make a home out of the earth. Bone china is a loaded and fascinating material, a parallel evolution in England made in response to Böttger’s work in Meissen — instead of blending local soft stones with kaolin, the Bow craftspeople, including Josiah Spode, used cattle bones obtained as waste from local butchers, heated and pulverized them to fill out the local white clay body, sometimes as more than fifty percent of the recipe. It is, no matter who you ask, “fancy” as far as materials go and a famously difficult material to work with outside of a specialized workshop, and the artist’s obvious care taken in turning this material into a sculpture is noteworthy. The layers of meaning are delightful to dig through: a stupa-esque form, made of animal by-product and clay, cut and shaped by an incredibly skilled human hand, somehow reflecting the alien logic of termites as they bore through dirt while simultaneously speaking to the history of wealth and power carried in the material intrinsically.

– Mark Warren is the creative director and co-founder of Haand, a human-powered manufacturer of porcelain homewares based in Burlington, North Carolina.

When I look at Elizabeth Alexander’s Spit Cake, I feel a sense of softness inspired by the creaminess and fragility of its porcelain and the daintiness of its fragmented silhouette. But I also feel tremendous anxiety at the sheer precariousness of the installation — how are these plates balancing? Are they going to fall? Why are so many plates upside down?

I am familiar with each of the objects in this installation. I recognize them as teacups, saucers, and dinner plates. I also recognize that every dish has been altered. Its edges look chewed into, gnawed away at. And the shape of these edges reminds me of something. I feel like I’m looking at features on a map. These borders remind me of the borders of political territories, especially the places where those borders encounter water.

All of this starts to make me wonder about the history of porcelain and its origins in East Asia and its subsequent exchange and popularity in Europe. I begin to wonder if these geographical borders, the precariousness of these arrangements, the flipping upside down, has something to say to me regarding cross-cultural exchange, or, more insidiously, European appropriation of non-European cultures.

– Kathryn Desplanque, PhD, is assistant professor of eighteenth and nineteenth century European art history at UNC-Chapel Hill. She is an artist and serves on the City of Durham’s Public Arts Committee and Cultural Roadmaps Taskforce.