Close Looks: "Aligned by the Sun (through the revolution)" by Ghost of a Dream

The video installation appears on seven television screens mounted across most of one of the gallery’s 30-foot walls. The screens are of three different sizes; four of them are smaller in comparison to the others, two are medium-sized, and one is larger than the rest. From left to right, there is one small, one medium, two small, one medium, the large, and one small screen, right next to each other. The screens are hung at varying heights, but they all link together in a continuous, connected series, with the sides of the screens touching one another.

On each screen there are multiple, sequential videos of the sun setting and each screen shows a sequence of different sunset videos. Each scene fades into the next one. The color schemes are different, with some videos showing brilliant, saturated colors and others showing more limited ranges of hues. The resolution of the sunset videos varies from one to the next, and the vantage point from which the video was taken varies too. In some videos it appears that the videographer held the camera very still and in others the videographers appear to have been moving.

Because the video screens are at different heights, the horizon line appears more or less continuous from the leftmost through the rightmost screens, but the imagery in each sunset video is different. There are many different types of clouds, for example, as well as fog, smog, mist, even rain. Along the horizon lines in the videos there are bodies of water, mountains, trees, buildings. In the foreground and middle ground of the videos there are fields, streets, beaches, trucks, cars, motorbikes, boats, and people. The scenes represent different seasons as well, most noticeably winter snow and summer heat.

Along with different imagery, there are also many different kinds of sounds. Waves crash, wind blows, rain falls, human voices talk, shout, or laugh, animal and bird voices call out, traffic rattles and rushes by, and music plays. The seven videos’ sounds overlap with one another so you can hear many different environments at once, with some scenes louder than others.

To experience the full range of video imagery and the effect of a broad, continuous but variable horizon line, viewers have to move back, close to the gallery’s opposite wall. From that standpoint the noises of individual videos blend together and some of the details in each scene blur. Viewers who position themselves close to the screens can associate particular sounds with particular videos and perceive details like foliage or window shapes or boat sails or birds. But even from a position close to a screen the video does not appear in isolation; the sounds from other screens are audible and light and some images from other screens intrude, reminders of the wide horizon the collected scenes form.

It is Tuesday, September 14, 2021 in North Carolina. Today the sun will set around 7:30 p.m. and I will witness sunset becoming dusk around 8 p.m. when I take the dog for her final walk of the day. It is dependable. The sun begins to set. The dog begs for a walk. 24 hours later. Repeat. In a precarious time brimming over with global instability and personal challenges the constancy of the sunset is reassuring. So why not catch and keep the sunset in its unfinished state? The videos in Ghost of a Dream do just that. A beach sunset transitions into a burning leaves sunset fades into a powerline sunset. Absent of conventional narrative, the videos nonetheless tell a universal story about the end of the day. It is a pink-orange-red-blue-purple story of always knowing what comes next and still being enthralled by the extraordinariness of the quotidian process.

– A dance historian and dramaturg, Amanda Graham is associate director of engagement at Carolina Performing Arts and a lecturer in UNC’s Department of Communication. Looking at art and learning from artists are two of her favorite things. 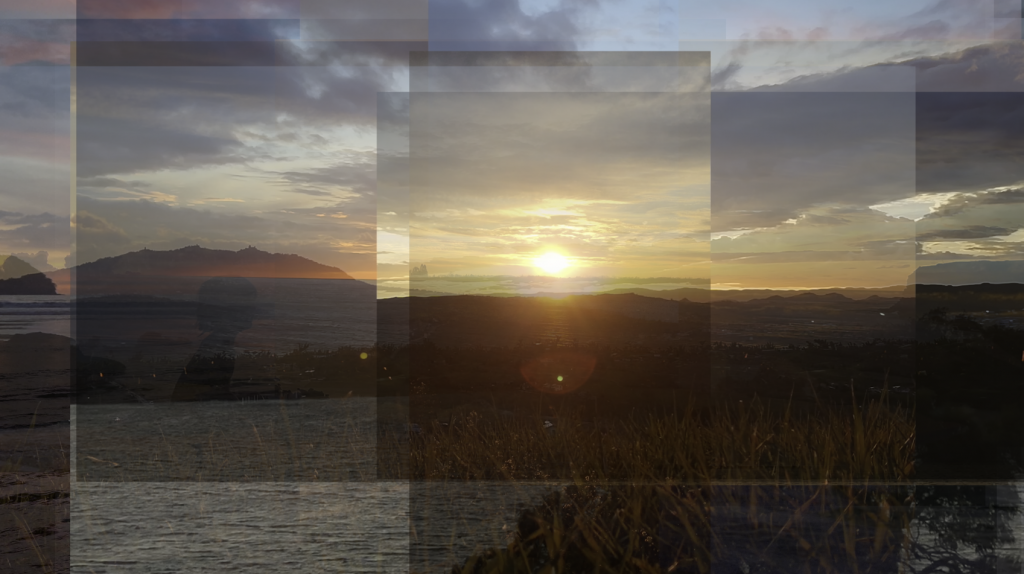 Ghost of a Dream, American, active since 2008, Aligned by the Sun (through the revolution), 2021, seven-channel video installation. Ackland Art Museum, University of North Carolina at Chapel Hill. © Ghost of a Dream.

Lined up to form a digital horizon, I see memories of the future gashing across seven screens, a collective palimpsest bearing witness to this Earthship’s rotation. Restlessly my gaze wonders from side to side tracing the continuities that spill past each frame, living lines of stacked sunsets signaling our cosmic interconnection. Sinking into the textures of these moving images, distinctions between places melt as ridgelines turn to oceans and thatched-roof vistas wash out into treetops in someone else’s egg-yolk dream. Where are my feet?

Each frame an unhinged door, layered and split to popple time in a sunblind vision of aligned ongoingness, creature comfort of shared experience. Against the skyline, silhouettes add shade to shadow as children’s figures in laughter color the air. Elsewhere it’s waves of

wind and prosthetic murmurs or the rustle of leaves — I’ve been in this movie before.

Leaving the museum soaked in sight, dilated pupil of the fourth-person singular, I’m left with yearning thought-dreams of a communalism after the end of the world, aligned by the sun.

– Emilio Taiveaho Peláez is a Ph.D. student through the Department of English and Comparative Literature. Their work engages the intersection of aesthetic experience and political discipline, blending critical, creative, and archival inquiry to explore subterranean philosophical and literary histories across the Américas.