This oil painting by Hale Aspacio Woodruff spreads out on a canvas a little less than three feet across and two feet high. Arcing and bending across the surface of the canvas is a landscape of swirling colors and fluid shapes. A tangle of dirt and soil, tree bark and leaves compose the foreground and midground of the painting. Above the serpentine, curved horizon, lies the sky which occupies the top third of the canvas. Three major color palettes segment the painting with the brown earth tones constituting the lower half of the canvas, darker greens and blacks forming the horizon of the work, and deep blues resting at the top of the painting.

Starting with the foreground, at the bottom of the canvas, in the center, an overturned tree branch angles to the left and rests atop a small mound of soil. The splayed forks of the branch catch the light as the viewer witnesses its light beige color contrast against the dark black outline of its shadow. A similarly beige concave mound of eroding soil supports the branch. Thick black brushstrokes outline the silhouette of the mound and form the shadow at its base.

To the left of the mound, a glimpse of a horizontal blue line suggests the presence of muddy water. To the right of the overturned branch protrudes a tree. This tree slants slightly to the right of the canvas and extends all the way to the top of the painting. Dark black and pencil thin, this tree’s branches point upwards with thin leaves suggesting a pine. Much smaller pine trees with similar forms sit to the right and left of the tallest tree.

In the center of the painting, numerous larger crests of soil and mud lean and collide with one another. The biggest of these hills slopes from the left side of the canvas oozing its reddish soil across the midground and foreground. To its right at least six smaller heaps of earth take shape through a mixture of chocolate browns, beige, muted oranges, and scarlet reds. The mixture of these different colors resembles different layers of soil or clay fusing with one another. Throughout these dunes, an impasto technique of thick brushstrokes and layered paint imparts definition, texture, and a sense of movement. Finally, although the coloration of this mass bleeds into each part, every mound is outlined with sharp black undulating peaks. These hills recede into the horizon which introduces a pea green and dark green palette to the painting.

To the top left of the canvas a leafy tree overhangs the chaotic soil, precariously slanted toward the center of the painting. This tree is angled as if the slightest breeze could send it toppling. The leaves of the tree form an almost smoke-like cloud of blacks, dark greens, light greys, and browns. Unlike the trees on the opposite side of the painting, the branches of this tree cannot be seen through the thick foliage. The shadowy intensity of this tree stands starkly against the bright center of the painting.

Above this tree and the horizon, the sky looms in a gradient moving from dark teal in the middle of the canvas to a light aquamarine at the top of the canvas. Speckling the sky are pockets of clouds whose irregular oval shapes emerge from thick brushstrokes of white and blue paint. Again, impasto gives these clouds the feeling that they are rising out of the canvas towards the viewer.

Upended, the clay and loam reveal the world underfoot, the burrowers annoyed. The trees have already seen too much, their exposed roots exclaim “what now?” As if the last several times weren’t enough. The humans don’t learn, but the rest do. The trees grasp before leaning too far, the roots regrow elsewhere. The birds reinvent in tilted canopies. The caterpillars inch up vertical branches, while new holes are torn into the earth by their namesake.

“Your machines could never,” I hear them say.

The burrowers will simply get their revenge. As you take your mid-afternoon coffee in your new subdivision, you’ll see they’ve migrated too. Try keeping the voles from the delicacy of your summer tomatoes, the gophers from your provider beans. 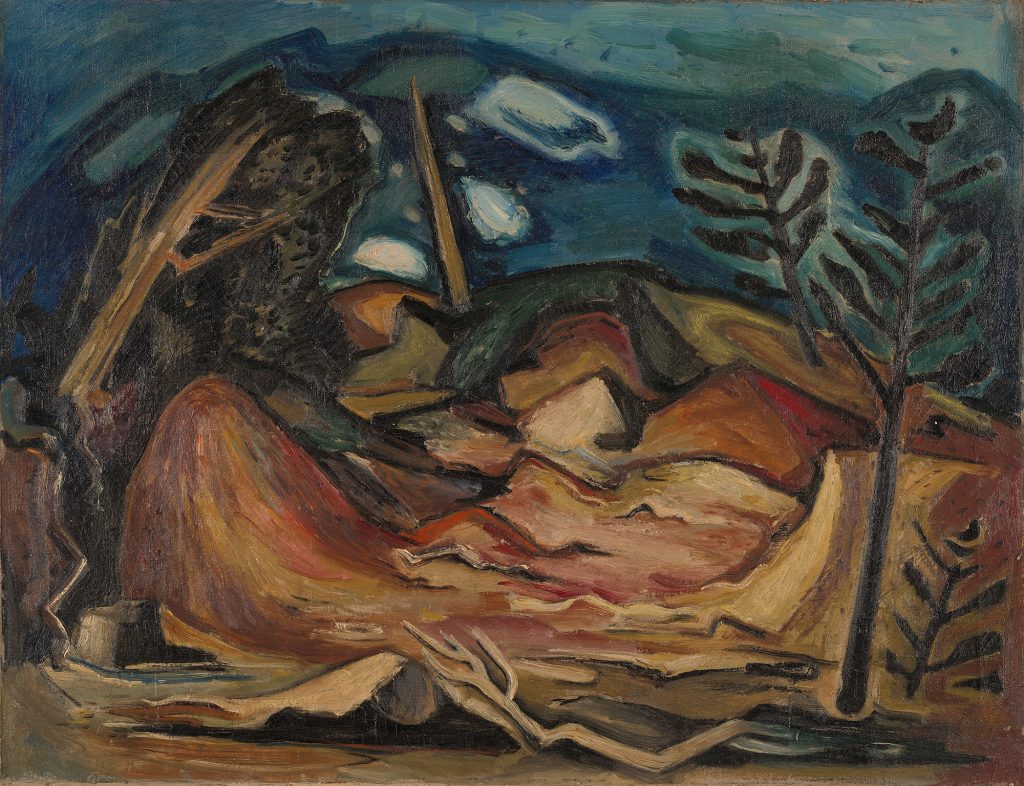 I grew up reciting Langston Hughes’s “The Negro Speaks of Rivers.”

The poem, like Hale Woodruff’s Landscape (Mississippi, Soil Erosion) resonates as meditation on a journey. For Hughes to Mexico. For Woodruff it’s less concrete, yet reflective of a creative voyage informed by the likes of Henry O. Tanner and Diego Rivera. Hughes and Woodruff were contemporaries in the Harlem Renaissance, an era of indelible artistic and intellectual mobility rooted in Black liberation.

As we emerge from a collective season of isolation, I am captivated by the idea of art making us feel less alone.

Hale Woodruff champions a timely notion of intentional connectivity through paintings that resonate with humanity’s innate yearning to be in community. In the instance of Landscape (Mississippi, Soil Erosion), this connection surfaces through engagement with nature, as many of us did during the pandemic.

Just below the surface of Woodruff’s landscape, as abstract expressionists like Alma Thomas challenged us to consider, we encounter important themes rooted in personhood and identity. For me, landscapes conjure the very journey Langston Hughes reflected upon: personal, reflective, full of adventure. I still wonder, as the painting invites us to consider, what Hughes’s journey must have been like — one impacted by the racial tensions of the time — yet also marked by the youthful optimism that travel imbues in most of us.

Woodruff’s eternal landscape is depicted in a style that informally magnifies the largeness of a world that exists just beyond our comfort zone. There is a euphoric invitation to contemplate the complexities of life’s journey, one that can be more dynamic than static, and one that, when fully explored, offers far more than we ever can imagine just beyond the horizon.

The word that comes to mind when I look at this painting is “turbulent.” It’s a scene in nature but it is not calming or soothing in any way — there’s a vortex of power that is dark and brooding. A brown and red curve of clay soil and sand at the bottom of the canvas reaches up to meet an arc of ominous, deep blue and green sky above. Three clouds look like projectiles. Two trees on opposite sides of the canvas are bending inward as if collapsing or reaching toward one another

I also see abstracted, humanlike features in this painting. A craggy branch at the bottom is like a bony arm and hand reaching up. Given the title, it’s likely a tree root, now exposed and vulnerable. Desperate. I also see a flattened face — with a mouth, nose, and closed eyes — in the trough of the land. Spooky.

This painting immediately reminded me of a (less sinister) painting by Marsden Hartley of driftwood logs washed up on a rocky shore. Both canvases have flat blocks of color made with wide brush strokes, and their landscapes are pressed right up against the canvas, almost tilted up in an in-your-face way. With these paintings being only a few years apart (Hartley’s is c. 1938 and Woodruff’s is c. 1944), I can’t help but wonder if the two artists were influenced by the same goings-on in American Modernism at the time. Regardless, in each painting there’s a sense of the artist’s veneration of nature and its power to alter the landscape — both artists are witnesses who have documented the brutality and beauty of its constant forces.

– Emily Bowles is a professional copy editor specializing in art history. She was formerly the Ackland Art Museum’s director of communications for eight years and still has many friends there.

Related Works by Members of the Spiral Group