Carved from sandstone, this perforated screen stands at three and a half feet tall by three and a half feet wide with a thickness of nearly four inches. Dated to the early seventeenth century, the screen’s smooth tan surface has worn away in certain places to reveal patches of dark brown and earthy light orange.

Cut into the rock, the geometric design is partitioned into four equally sized rectangles circling a central square. Occupying the center of the screen, this square measures at half of the length of each of the rectangles. Each panel is recessed into the sandstone slab with an angled border of small cutout triangles that measures an inch. Outside of this recessed border lies an inch wide gap of polished sandstone. This polished sandstone separates each panel from the adjacent panels or the edges of the screen.

Each panel, and the central rectangle, contain intricate, non-figurative patterns formed through lattices of thin, intersecting sandstone filaments. Each of these weblike filaments, measures approximately half an inch wide. The negative space created by the cut away sandstone allows for the viewer to look through the perforated screen and would also allow for light to cast shadows that project the panel’s patterns onto nearby surfaces.

The four rectangular panels harbor identical repeating patterns centered around interlacing and adjacent octagons. As two octagons rest side by side vertically, they will overlap with octagons horizontally creating a diamond pattern through the network of sandstone. This larger diamond pattern is repeated on a smaller level at each of the corners of the larger diamond due to the overlapping lattices of the octagons.

The central square panel hosts a unique lattice pattern created through an interplay of circles, pentagons and ribbon shaped polygons. The two small circles that reside in this square are the only circles that appear throughout the whole perforated screen.

In this Jali Screen from South Asia, I see the patterns and repetitions of everyday life. Carved from durable stone, but made to appear as delicate as crossed and knotted threads of lace and embroidery, this window covering provided privacy for a building’s inhabitants and yet at the same time access to light and air and views of the passing world outside. The geometric interwoven shapes, like the corresponding play of light and shadow they would throw across a room, animate the cyclical nature of the passage of time, meetings and departures, constancy within change. The deeper and wider framing elements add to the dynamism of the composition, with four rectangles rotating around a center square. Here, architecture presents the viewer with a paradox, something that moves and stays in place at the same time, revelatory of deeper truths within ordinary lived moments.

– JJ Bauer is Visual Resources Curator and a teaching assistant professor in UNC-Chapel Hill’s Department of Art and Art History. She teaches courses in global architectural history with an emphasis on the modern era. 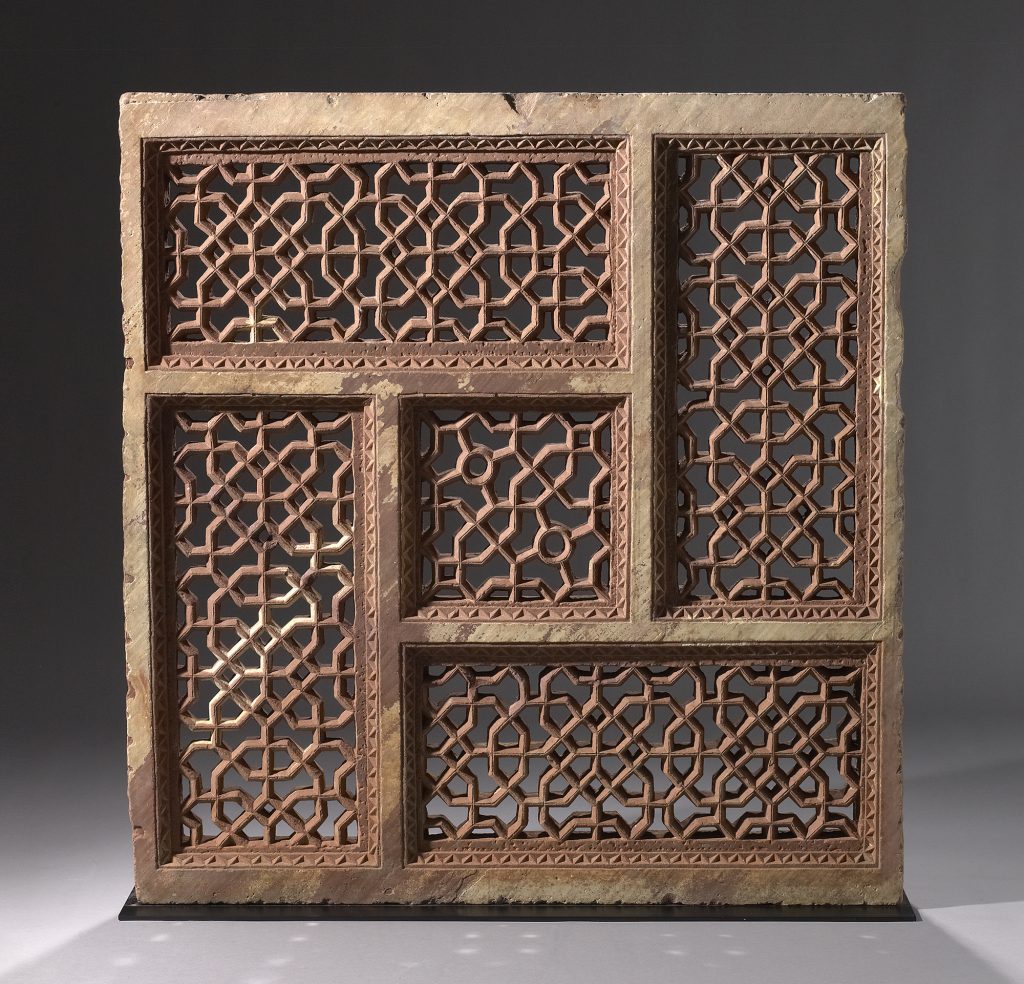 I see slab of red sandstone mottled with the sediments of time, that an artist’s hand painstakingly transformed into a luminous square of beauty, from the time when Mughal emperors ruled India. Intricately and delicately carved, it is a fine example of jālī (“netting”) work. As its name signifies, it evokes in stone the artistry of a finely woven textile with interlocking strands. I see an ingeniously cooling screen that provides privacy, filters out harsh sunlight, and channels warm air into a cooling breeze. I see geometric and botanical designs in the “netting” and a sublime symmetry overall, hallmarks of Mughal art and architecture. I see brilliant movement in a static piece of stone: four interlocked rectangles arrayed around a central square, like petals whirled around a flower’s central disk — each segment with its own border

with a triangular motif. Zooming out, I see a stationary square that “rolls” like a wheel. Along the perimeter, I see something nefarious: scars, including one large telltale scar on the top, from when this piece was hacked from the external wall of a palace, mosque, tomb, or fort — a monument looted and dismembered for trade in the markets of the Global North.

– Pamela Lothspeich is an Associate Professor and Coordinator of the South Asian program in UNC-Chapel Hill’s Department of Asian and Middle Eastern Studies. She is a specialist in the Indian epics, in literature, theatre, and film and serves as the Director of the New Faculty Program at the Institute for the Arts and Humanities