At the center of a square painting, a uniformed man stands, leaning a bit to the right. The painting’s lower edge crops the figure at hip level. The top of his head comes within a few inches of the top of the painting. His stance is casual. His left arm hangs along the side of his body and his right arm is bent, his hand in his pants pocket. His head tilts toward his left side (our right), and his neck turns just slightly upward, so that more of his left ear is visible than his right.

There are several shades of green in his uniform jacket and pants – four, five, even six – and additional shades of green in the camouflage-patterned ascot at his neck, which also contains shades of gray and pink. The colors are echoed in his belt, the “US ARMY” patch on the breast of his jacket and stripes on his jacket sleeves, the buttons that close the jacket and breast pockets, and the inside of his right cuff, visible at his hip where the man tucks his hand in his pants pocket.

The grays and browns in his face, the pinks of his full lips, and the darker gray-browns of his close-cropped hair and neat, slightly raised eyebrows are cool tones, as are the tones throughout the painting. In his face, the coolness of the colors recalls the appearance of a faded color photograph, though even if they look faded, they are still numerous and nuanced.

In the background, the colors include blues as well as pinks, grays, and greens (including one darker shade of green not found in the uniform). The background colors read like the foliage and light of tropical settings, when seen from a distance. Up close they look like abstract forms, some of which echo the shapes of colored sections in the uniform.

The pattern of colors on his uniform, his skin, and in the background suggest camouflage, but also the play of dappled light and shadow on a three-dimensional form.

In areas of a given color, there are wavy, curving outlines and inside those outlines, the paint itself is thicker, denser, shinier in some places, and thinner, paler, and more watery in others. In some places brush marks are visible. In some of the areas of thicker painting, light reflects on the surface, while in some of the thinner areas, the color seems to have been partially absorbed into the thick paper on which the painting was made. In some of the areas of foliage in the painting’s background, particularly in the pink and gray sections, pencil lines are visible. Pencil lines are also visible in the man’s irises.

There is an unpainted area of paper that surrounds the image. In that unpainted area, at the lower right, the artist’s signature in cursive, in pencil, appears: “Owens 2020.” The boundaries of the unpainted edge look square but they are also delicately irregular, as if they were painted freehand, with a full brush. In certain places around the edges of the painted area – at the lower border of the left side, the bottom center, the lower right, and the upper right corner – pencil lines emerge from beneath the layer of paint. A pencil line also marks the vertical center of the image.

I see a Staff Sergeant, spit-shined in ceremonial dress — shiny brass buckle, silk ascot, and pressed jungle green uniform — worn on this occasion to match the sharp formality of whatever ritual awaits him, maybe a pass-in-review or change-of-command, or maybe he’s preparing to take his place as an armed guard on either end of the nation’s satin symbol. It would explain the ascot around his neck, an accoutrement meant for the pomp and display of spectacle as he snaps his rifle from shoulder to shoulder, not for disguise and cover as he snaps magazines into his rifle, spitting rounds at bodies dressed in black. His jungle war is behind

him, signaled by the green-brown reeds slanting in the background. But his jungle war is also with him, signaled by those same reeds, patched into the frame as he stands waiting for the next looming spectacle requiring his sharp skills — another tour in Vietnam, another parade, or another patrol through familiar streets filled with different deadly obstacles.

– John Bechtold is a veteran, artist and academic. His work focuses on the dissonance between representations of warfare in public memory and lived experience.

The level of vulnerability conveyed in Ruth Owens’s painted portraits derived from family archival photos and film is particularly intriguing to me as an art collector. The nostalgia that the 1960s and 1970s era may invoke could easily bring about progressive dialogue when viewing Owens’s Vietnam Opa portrait in the gallery. Owens’s explorative narrative in her paintings — addressing the black body contextually outdoors and in nature — pushes scholarship on contemporary painted figures.

– Schwanda Rountree is an attorney, independent art consultant, and member of the Ackland’s National Advisory Board.

I worked most of the early years of my life in the cotton fields. During the formative years of my life, I alternated days between school, and the four (Ps): picking cotton, pulling corn, picking peas, and picking up pecans. During those days much of my time was spent trying to avoid thoughts about the condition in which I lived. People in our community called it coming to the end of the road, and I later learned this was a form of depression.

As a way out of my hopeless circumstances, I joined the U.S. Army at age seventeen, and my first deployment overseas was to West Germany. This was an opportunity of a lifetime for a young man who had never crossed the borders of Texas until joining the military. I finished high school while in the military, met my wife, started a family, and worked my way to a Masters of Education degree.

Payback time to the U.S. Army for all my opportunities and successes during my military career came in the form of an assignment to Vietnam. Although I had taken an oath and was sworn to defend the United States against all its enemies, I did question my decision to join the Army when I was ordered to that zone of conflict.

During my assignment to Vietnam, I supervised the communications facility (Phu Lam Facility) which communicated between the U.S. Pentagon and all major allied forces in Vietnam. I was in charge of over 60 service members. As the supervisor of so many young men who had put their lives in my trust, my major task was to ensure that each of these young men came back home to their families safe and sound. Conversely, I trusted my commanders to deliver me safe and sound to my family. I felt safer in Vietnam with the soldiers whom I served with than I would have felt serving under the same circumstances in any other part of the world.

New roads and new directions (re-enlistment) came for me during the sixth month of my tour in Vietnam. I could have chosen to return home and leave the military, but I chose to stay with co-workers, soldiers, and the military family with whom I had so tightly bonded. After a year, I did return home safely, and served a full career in the military until retirement age.

– Arnold Owens is the figure depicted in Vietnam Opa and the father of the artist. 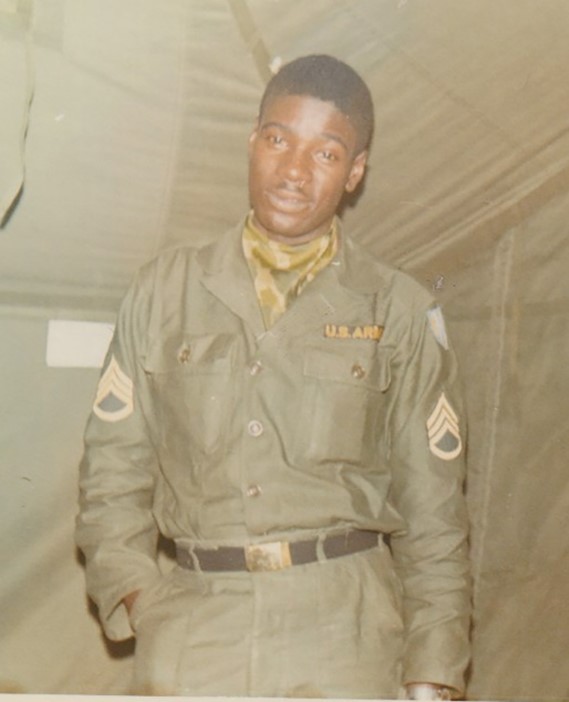 Related Public Programs in Our Area and Online

While the subject of Vietnam Opa, Arnold Owens, is alive and well, tens of thousands of soldiers were killed in battle during the Vietnam War. Their service and sacrifice and that of others is honored in this live streaming event and will be available for viewing online two weeks following the broadcast.

Ruth Owen’s Vietnam Opa is one of many recent works by the artist in which she considers the relationship between the Black subject and the natural world (learn more about this aspect of Owens’s work in the interview above). National nonprofit Outdoor Afro fosters leadership and connections with nature by supporting community-organized events “where Black people and nature meet.” Use Outdoor Afro’s map to find a local meetup – there’s even a group in Durham!