Audio Description of Stem Cup and Stand
The silhouette of the Stem Cup and Stand looks perfectly symmetrical, composed of curving and counter-curving lines. At the top is the hemispherical Cup. Although it is only a couple of inches deep, with very thin walls, its proportions make it seem larger. The Cup sits on a small foot with a concave curve; at its bottom edge, the foot appears to be about half the overall width of the Cup. The foot is set into a shallow circular rim at the top of the Stand portion of the piece. An area of shadow between the bottom of the foot and the shallow rim indicates that the Cup and Stand are separate pieces. The Stand is made up of three components, one on top of the other. The uppermost component of the Stand looks like an inverted bowl, almost as wide and almost as deep as the Cup. The top part of the stand acts as a pedestal for the Cup. The top sits in the saucer-shaped middle component of the Stand, whose lip is the widest part of the piece. Below the saucer is the third component of the Stand. It is a foot, about an inch high, that slopes slightly outward from the place where it connects to the underside of the saucer.

The entire object is covered with a pale, almost white glaze with a uniformly lustrous surface, but there are some variations. Around the very bottom of the Stand, and in the places where one curved form joins with another, the glaze is slightly thicker, making it evident that there is pale, greenish, bluish pigment in the glaze. On the Cup’s inside the glaze is thicker around the upper edge. In one place, the glaze is thick enough that there is a small, slightly raised, globular area, as though the glaze were almost thick enough to form a drip. Across the surface of the Cup’s interior there are irregularities in the surface that almost look like crackling, with both paler and more pigmented colors. Along the delicate rim of the Cup, tiny chips, presumably due to age or wear, are visible. Because these chips cut into the material of the cup, past the glaze, the white porcelain that the cup is composed of can be seen.

A favorite of many ancient Chinese ceramics I collected. When I saw it in the shop on Hollywood Road in Hong Kong, it struck me how delicate it was in shape, size, thinness, whiteness. Balanced, beautiful. Even for a Song dynasty piece it is very thin porcelain and unbroken all these centuries later.

Remember, the Chinese knew how to make this hard paste porcelain fully a thousand years before the Europeans in Meissen figured out the process. It’s awesome.

You’re looking at a piece made nearly a thousand years ago. Look close, think far.

– Smith Freeman is a member of the Ackland’s National Advisory Board and, with his spouse Austin Scarlett, the donor of this work. 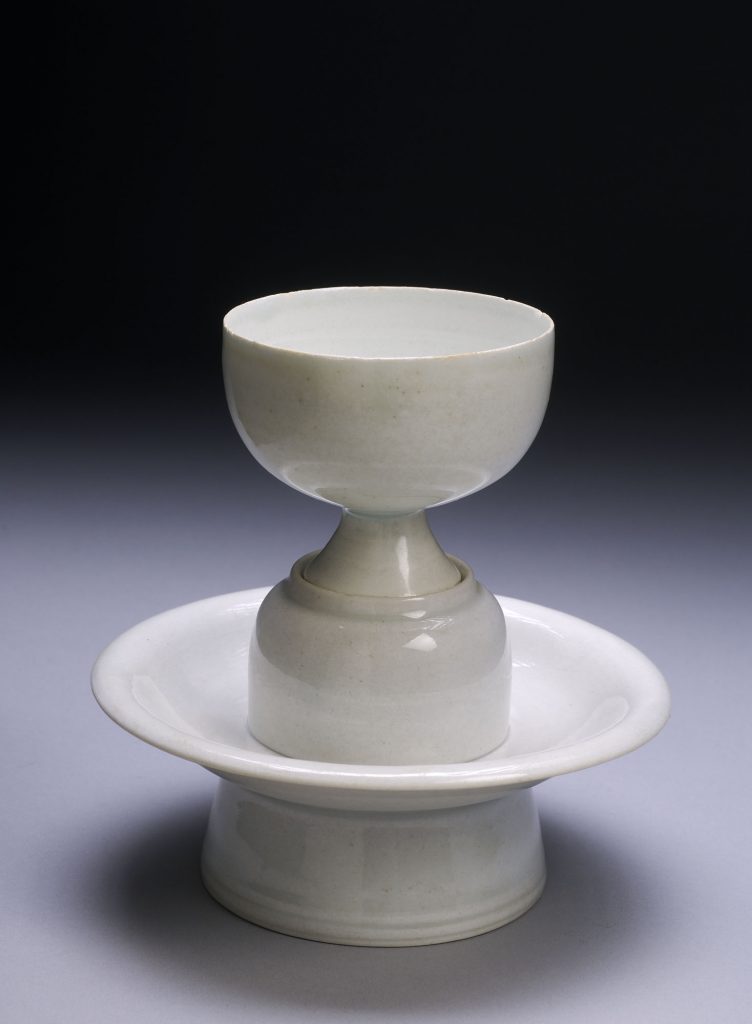 This is an elegant, light and thin wall with translucent gem-like blue-tinted white glaze Qingbai porcelain cup that is a reminiscent of the era of Song dynasty when literature and art were at its peak and Taoism and Chán (Zen) Buddhism were enthusiastically accepted and widely spread.

The cup and its stand have interesting components pieced together — the stand can be broken down into the cylinder base, the saucer and the inverted cup shape on top as a stand for the cup. The cup has flare out foot that sits on top of the stand. When looking at the whole piece, the three repetitive but varying sizes and shapes cylinders or cups intersected by the saucer and the foot provide an ecstatically pleasing form. The perfect symmetry provides a further depth and balance to the structure. The concave and convex shape recalls the cup and face image in psychophysics that tricks our perception of the object. The multi-layer shape also resembles the ceremonial vessels used for spiritual and ancestor offering on the altar.

the saucer and the cylindrical base. The very fine and subtle crazing or cracking can be seen on the surface of the glaze, which was caused by hydrostatic tension in the reduction firing that led to the formation of inter-penetrating microvoids and small fibrils in the process, as the glaze shrinking more than the clay during the cooling process after firing. The thinly or lack of glaze at the rim of the cup shows that the cup was fired upside down in the kiln, and the thin wall exposed the fine quality of the white porcelain, together with this Qingbai glaze suggested that this is probably from Jingdezhen area in Jiangxi Province during Song dynasty. There are only a few small chips on the thin rim of the cup through the centuries suggesting that this piece had been well taken care of in good homes or museum.

I like the pure blue-tint white color and the pearl-like luster, as well as the symmetrical balance of the complex yet elegant form with subtle rings resembling ripples of water.

– Psyche Lee is a research scientist and docent at the Ackland with interests in calligraphy, Chinese watercolor painting, and pottery.