“Head of a Boy” by William Artis

Close Looks: "Head of a Boy" by William Artis

Audio Description of Head of a Boy by William Artis

The boy’s head in this sculpture is about the size of an adult’s head, larger than that of a child. The sculpture rests on a rough, gray-stained wooden base with a brass plate engraved with the artist’s first initial and last name: W. Artis, for William Artis. In the Museum the sculpture and base are installed along a horizontal axis at a height that, for standing viewers who are 5’6” or taller, creates a relationship that mimics that between a standing adult and a standing child.

The boy’s expression is calm, which calls attention to the striking symmetry with which Artis modeled his gracefully curving facial features. Upon closer inspection, there may be a slight tilt of the head or turn of the neck to the boy’s right (our left). Although the light gray ceramic material is hard and its surface is rough, Artis created the illusion that the cheeks, lips, eyelids, and ears are fleshy and soft.

The front of the sculpture is the most finished side, but there are areas of the sides that appear finished as well, such as the cartilage of the ears. And the contours of the head and neck on the sculpture’s back side are nuanced and realistic. Other surfaces on the back and side and the top of the head, however, are irregular and appear almost as though the artist left them unfinished. There are some smooth areas, some tool marks, and some places that look like little pieces of clay were pressed into the head and not quite fully worked into its surface. But in other places, these added pieces of clay read like locks of hair in a close-cropped haircut.

Along the hairline on the boy’s face there are horizontal and vertical tool marks. His eyebrows are delineated with sharp, arced incisions. There are linear, feathery marks on the neck behind the boy’s left ear that resemble the kind of marks that might have been transferred to the sculpture if it were wrapped in some kind of protective fabric to transport it when it was still wet.

This is a monochrome sculpture in a pale gray color that is different from both the white marble often used in portrait sculptures and the varied colors of a living boy’s head. The play of light on its irregular surface and the reflections and refractions the Plexiglas case creates make the pale gray color of the low-fired clay seem warmer and purplish in some places, like the brow and the back of the neck. The texture on the painted wood of the base harmonizes with the colors and textures in the clay.

I see a small child’s face at rest, yet full of expression. The lighting in the gallery casts shadows beneath the child’s slightly raised eyebrows, wide nose, and lower lip, enhancing their enigmatic gaze. The sculpture’s title indicates this is a boy, but I can just as easily see a little girl awaiting the additional external expressions of gender. The sculpture has a rough, unfinished texture, even on its smallest features, like the delicately modeled ears, nostrils, and eyelids. When I kneel down, the clear vitrine surrounding the sculpture reflects my own image back to me; my face disappears into the ashen clay, and my shoulders and torso fill in the missing form of the child’s body. The sculpture is mounted on a weathered wooden base with a tarnished metal tag affixed to the front with two screws and bearing the engraving “W. ARTIS.” Why would the artist mount what seems to be an unfinished sculpture? Perhaps it’s not unfinished at all, but rather inviting the viewer to see the child of their own imagination.
– Eileen Hammond is a former Ackland communications assistant and is presently a communication instructor at Davidson-Davie Community College. 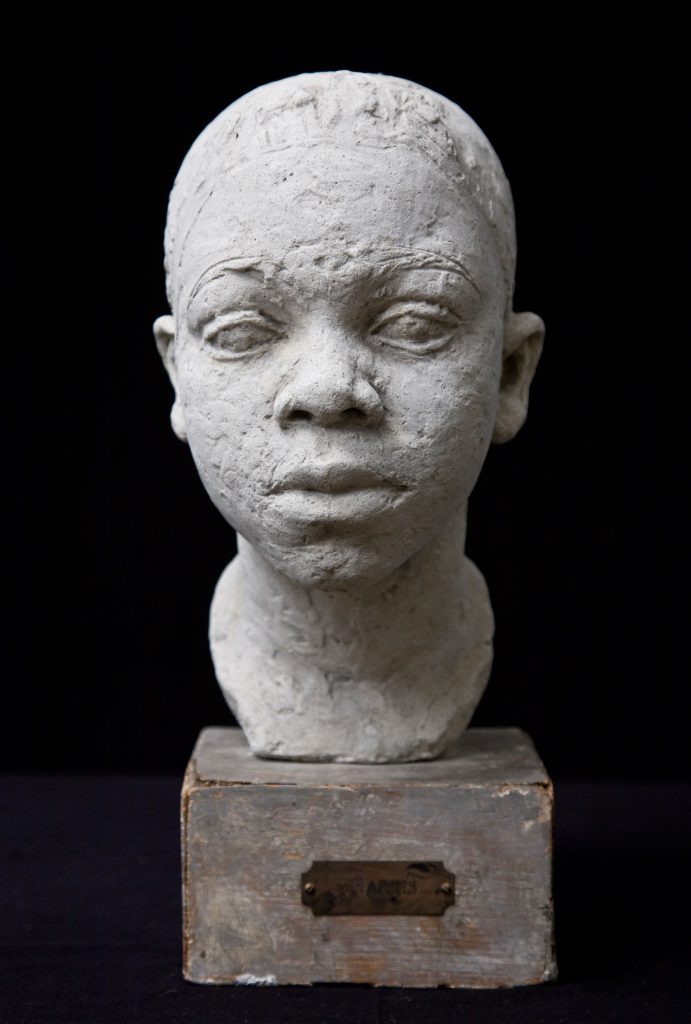 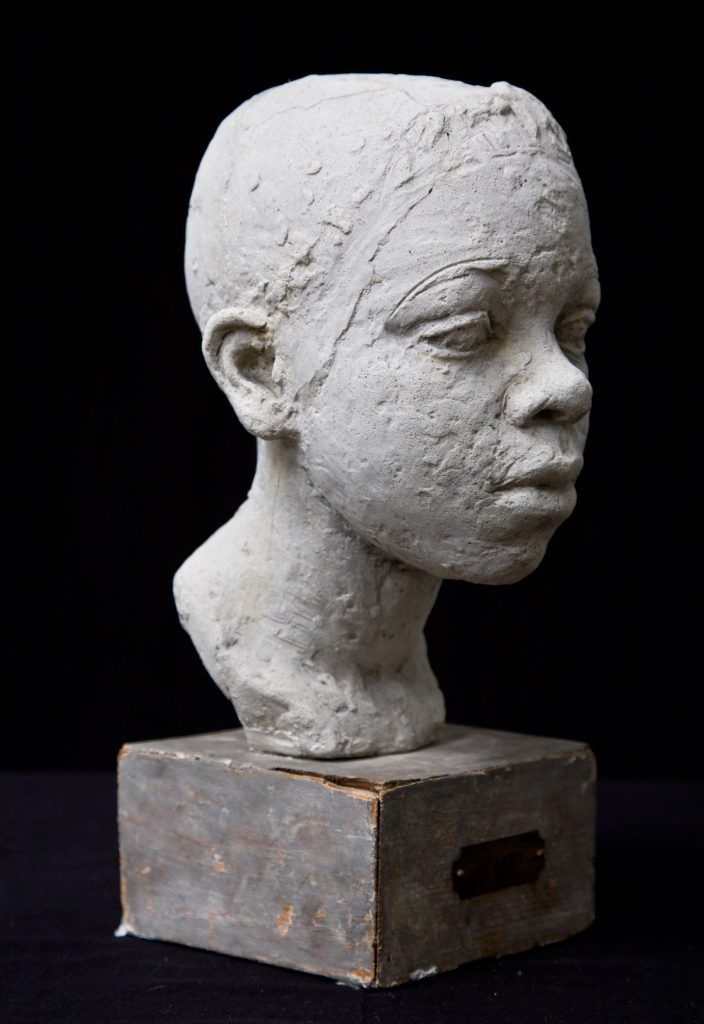 I see the rawness of youth, both potential and hope but also apprehension, in this early sculpture of a young boy by William Artis. The rough texture of the piece creates a vulnerability despite the solid forms and fine proportions. It is interesting that this is an early piece in his career and of a young boy in early life. In our collection of William Artis’s work at Chadron State College, the sculptural busts are of strong, young men in their college years. These busts are larger and more powerful with confident expressions in their smooth terracotta surfaces. The solidity and simplified essence of these later sculptures show Artis’s continuing skill and deftness in capturing the human form and spirit. It is also interesting to note that when William Artis was a faculty member at Nebraska State Teachers College (now Chadron State College) from 1954 -1965, he was the first art professor in the newly-formed Art Department (1956) and he was also the only African-American faculty member on campus — in a small town in the remote and rural area of northwest Nebraska. For Artis, this must have taken great strength, perseverance, and dedication to his art in living in such an isolated area. Diverse students, including those from the nearby Pine Ridge Indian Reservation, found in William Artis a great example of encouragement to continue their studies and education. His presence and work here provided them with that same potential and hope that we see in this early piece, Head of a Boy.
– Mary P. Donahue is a Professor of Art at Chadron State College.

Related Programs in Our Community