Audio Description of Zia Pueblo Dough Bowl
The bowl is relatively large, roughly one-and-a-half to two feet wide at its rim and standing just over fifteen inches tall. From its opening, the side walls of the bowl curve outward slightly beyond the rim before tapering down to its small, round base. The bowl has a thin lip along its rim that flares slightly outward. The texture of the bowl is both rough and smooth. The walls appear very thin and make the bowl seems lightweight to hold despite its size.

The bowl is made of clay in a rich terracotta, red-orange color. The exterior of the bowl features a thick, decorated band that circles the vessel’s entire upper perimeter. In contrasting creamy white and midnight black paint, the artist has created several series of abstract designs that distinctly contrast the red ground underneath. The designs are matte rather than glossy and have faded to muted hues with time.

Three painted motifs occupy the decorated band, which is outlined in an off-white paint. The border lines, as well as those within the motifs, are not perfectly straight and are clearly hand-painted. In places they dip, in others they thicken then thin out. The first of the three motifs is a pointed leaf shape with sharp curves of black paint over a white background. The shape of the leaf resembles a snowflake or cross. In stark contrast, its neighboring motif is a white feather form on a black background. The background shape resembles a set of stairs or zig-zag pattern on the right of the feather form. The feather form has rounded edges resembling flower petals. A line runs through the feather with two curly ends, similar to flower pistils extending out of a blossom or a chameleon’s tongue. The last motif consists of three shapes that form an almost full circle that look like an eye. Two of the shapes that are side by side are identical and resemble the sharp blades to a fan. The largest of the three shapes has a white line running through it like a ramp. These three motifs repeat around the bowl’s full circumference.

In its museum case, the wide upper body of the bowl casts a shadow on the lower portion, giving the illusion that the lower portion is much smaller than it is in reality. On the outside of the bowl, there is a heavy presence of discoloration from handling and exposure for more than one hundred years. The inside of the bowl looks almost perfectly round if one leans over the case to peer inside. White powdery specks are sprinkled along the bowl’s inner walls. They resemble dried dough, prompting the viewer to imagine the bowl’s utility when first created.

When I view the Zia Pueblo Dough Bowl, I’m transported to the American Southwest. The bowl is battered, scuffed, and scratched, but the intricate design is still obvious. The artist must have taken great pride in her or his work. I also believe it is important not to overlook the clay color itself. Pueblo peoples have made their homes in the deserts of present-day New Mexico for generations, and the bowl’s reddish-brown color reflects their deep connection to the desert environment. I wish I knew more about the leaf designs, which could provide details about the agricultural practices of the Zia Pueblo peoples or the spiritual and cultural significance of specific plants.

Alternatively, the bowl could have been a means for the artist to generate much-needed income. He or she might have sold the bowl to U.S. officials or white American tourists, who were starting to explore the North American West during this era. I initially assumed that the bowl dated from a much earlier time period because of its appearance, but we must recognize that this was a piece of modern artwork, created around the turn of the twentieth century by an artist whose people are still here today. 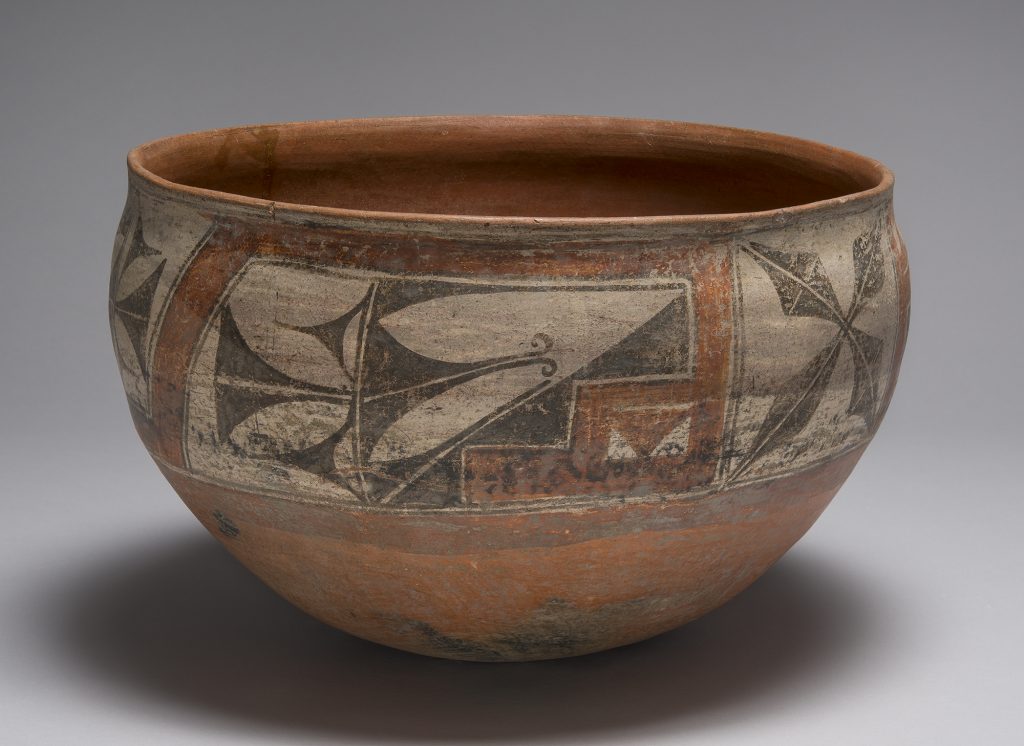 I see a material object, a clay bowl beautifully shaped and adorned by a Zia Pueblo person at the end of the nineteenth century, that asks as many questions as it provides answers. I see in its shape, substance, form, and style a story of Indigenous persistence, despite more than 400 years of contact with colonizers.

I imagine the hands of a person who engaged in everyday acts of resistance and refusal by crafting something that represents not just a “bowl” but a constellation of deeper meanings, such as Zia ways of being, belonging, knowing, and navigating extraordinary challenges. I see a tangible representation of a people’s ongoing intimate connection to the land.

I am reminded that 1890, the estimated date of its creation, brought with it the horrific massacre at Wounded Knee on the Pine Ridge Reservation and hubris-filled assertions by non-Indians that the

frontier had closed and that Indians were doomed to vanish. I see in this bowl a person who didn’t believe them.

As I look at this bowl, I wonder why the creation date is estimated and the maker is unknown. I wonder how the bowl became a part of a museum collection in North Carolina. And I wonder if others see in these attributes the stories of erasure, appropriation, dispossession, and dislocation that are at the heart of the so-called American Story.

I see in this bowl a maker and a people who knew that these were not the only stories to be told about Native America.

– Daniel M. Cobb is Professor of American Studies and Coordinator of the American Indian and Indigenous Studies Concentration at UNC-Chapel Hill

My initial thoughts when looking at this bowl were focused on the delicacy of the rim and amount of time that the artist spent with all the decorating. It is a very refined piece to be used every day and still in good condition. I wonder if they possibly sold or traded their pottery. This might explain why it is in such good condition. When making this it looks like they burnished terra sigillata into the raw clay surface, and used other slips to make symbols, and then fired it maybe in a pit. The contrast between the red clay that they dug

and the white and black slips used highlight the designs moving your eyes around the pot with some repetition in the design. The burnishing would help to make the vessel more watertight, and act like the glazes most potters use now.

–Julie Berkowitz is a ceramic artist and educator who lives and works in Chapel Hill, NC.

I see a large earthenware bowl that is both practical and beautiful. Its size is impressive and reflects the skill of the potter that created it. I see a utilitarian object that shows us the result of skilled hands. Not content to simply accomplish the task of making a dough bowl, they added a decorative band of slip to the burnished bowl, using three colors to paint traditional motifs around the delicately flared rim. I see the product of a culture that prized the marriage of function and form, that adorned fragile everyday objects. I see a bowl that was valued and preserved – or perhaps that was simply lucky enough to survive centuries. I see a bowl that was used and worn, that bears the marks of life in its scraped decoration and the chips along the rim.

I see a bowl that has been transformed, taken from its original purpose and turned into an example. I see earth that was

transformed through patience and skill, that withstood the refinement of fire, and served a purpose, and that has now passed through time to tell a story to any who would pause and see. Can we truly hear its story though, without using and loving it? We can only imagine now what it could tell us — about where its clay came from, about who its maker was, and how it lived its life before coming here to the pristine case of an exhibit. We can only understand part of the bowl’s story here. The other part fell silent when it ceased to be used, and was no longer an assistant in the feeding of many.

–Greer Freidrich is a potter who graduated from the College of Wooster with a Bachelor of Arts in Studio Art. He works and teaches at ClayWorks in Charlotte, North Carolina and enjoys producing works of pottery that capture the beauty of everyday life.