How We Remember: Memory and Vernacular Photography 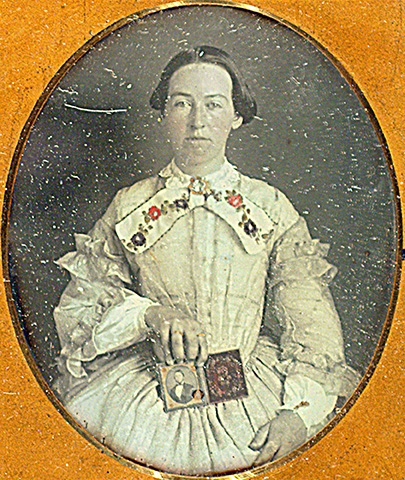 The famous French writer Honoré de Balzac (1799–1850) dreaded being photographed, as he believed the camera took a part of the sitter’s soul with each image. To have your image “taken” or “captured” is a practice we are all familiar with in the 21st century, but how much of someone’s soul is really in a photograph? Does this change when we do not know who the someone in the photograph is?

When a photograph is originally intended as a means of remembering, forgetting who the sitter is and what they are doing becomes poignant, intriguing, and challenging. For example, in Woman, an unidentified woman memorializes an unknown man by holding up his image. The object she grasps is a daguerreotype, the same medium used to make her own portrait and the earliest patented form of photography. Daguerreotypes often came in small cases that opened and closed like a book, usually making for a private and intimate viewing experience. In this image she holds the daguerreotype open, presenting the image to the viewer. She depicts herself in a moment of commemorating the man in the portrait.

The object makes us ask questions. Who was this woman, and who was this man? What was their relationship? Was he dead at the time this photograph was made? Why does this belong in an art museum? In an effort to depict herself in a moment of remembrance, she probably never intended for this daguerreotype to end up at a museum. The things we admire about the object as a work of art today were perhaps inconsequential to the people involved in the making of the photograph. 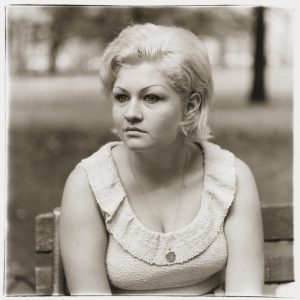 In contrast, consider an image by Diane Arbus, Woman with a Locket in Washington Square Park, New York City. We are given more context for this photograph, including who took the image and where the subject is. Museums across the world collect the work of Arbus, so her artistic intent is usually unquestioned. But we are still left with many questions. Who is this woman, and what is in her locket? The locket is closed, unlike the daguerreotype, leaving us to wonder about the picture inside and reminding us how private and personal viewing an image can be. Arbus often photographed her subjects after getting to know them well in familiar settings, such as their homes or the park. In this image the woman’s forlorn expression and indirect gaze suggest an unguarded moment of mourning loved one.

These two photographs task us with the role of remembering in the same way the women in the images hold a memory with them. In considering the vernacular photograph, not unlike the Arbus portrait, we may never know who the people are or who is being remembered in this moment frozen by the daguerreotypist. How much of their souls exist in these images when we have forgotten so much about them? Is it our job to remember or find out more? What even makes a photograph vernacular, and is it so different from other types of photography? It is here that I realize vernacular photography poses more questions than provides answers, and this is where my interest begins.

As the 2021 Joan and Robert Huntley Scholarship recipient, Julianne Miao spent the summer studying the photography collections of the Ackland and the NCMA. She is finishing her master’s degree in art history at UNC–Chapel Hill, working on American photography, and has a special interest in issues of race, gender, and commodification. In a collaboration between the Ackland and the NCMA, Miao investigates the question of what makes a photograph vernacular and complicates the distinctions museums make between vernacular and fine art photography. 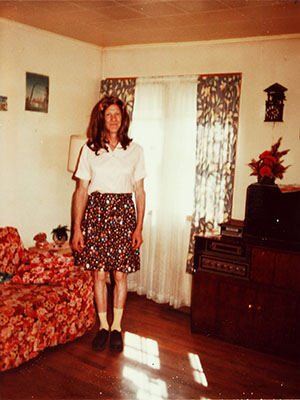 How We Remember: Museums and Vernacular Photography